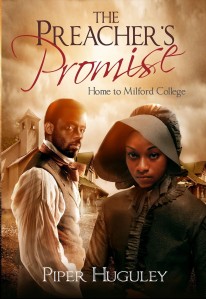 Historical 1866: Amanda Stewart promised her dying father to use her education to uplift their race and teach newly-freed slaves. When she arrives in Georgia, blacksmith Virgil Smithson tells her female teachers aren’t welcome. But he has just met a woman whose will is as strong as the iron he fashions. These combatants must put aside their personal feelings to learn God has his own plan that comes from the promises they made to their loved ones.

Devastated by her father’s death days after her triumphant graduation from Oberlin College, Amanda Stewart is all alone in the world. Her father’s unscrupulous business partner offers her an indecent proposal to earn a living. Instead, to fulfill a promise she made to her father, she resolves to start a school to educate and uplift their race. Sorting through her father’s papers, she discovers he had carried on a mysterious correspondence with a plantation in Milford, Georgia. She determines to start her teaching work with the formerly enslaved. However, when she arrives, the mayor tells her to leave. There’s nowhere for her to go.

Virgil Smithson, Milford’s mayor, blacksmith and sometimes preacher man with a gift for fiery oratory, doesn’t want anything to do with a snobby schoolteacher from up North. On top of everything else, the schoolteacher lady has a will hard enough to match the iron he forges. He must organize his fellow formerly enslaved citizens into a new town and raise his young daughter alone. Still, his troubled past haunts him. He cannot forget the promise he made to his daughter’s mother as she died—that their child would learn to read and write. If only he didn’t have secrets that the new schoolteacher seems determined to uncover.

To keep THE PREACHER’S PROMISE, Amanda and Virgil must put aside their enmity, unite for the sake of a newly-created community in a troubling age, and do things they never imagined. In the aftermath of the flood that was the Civil War, God set his bow upon the earth to show love and understanding for humankind. To reflect God’s promise, these combatants must put aside their differences and come together–somehow.