The last thing Karlie Angel wants to do is travel home to attend her younger sister’s wedding. As if catching her boyfriend in bed with her little sister wasn’t humiliating enough, now she must watch them say, “I do.” Karlie has given up on love, men and her own happily ever after. She just wants to get this nightmare wedding over with and head back out of town. But she didn’t count on Drew Jackson.

Drew had been in love with Karlie since senior year of high school, but she belonged to Jake Ashbrook then. Now, he sees Karlie’s return as his only chance to claim her. He just needs to convince Karlie to let him into her heart. Sometimes, actions speak louder than words, especially when Karlie’s past comes back to haunt her. Drew must find a way to keep her safe and convince her not to run again.
Love Times Infinity is the first book of The Relinquished Series.

“Hey there,” he greeted. “You’re up. I was gonna let you sleep in. You must be tired.” He grimaced with his last statement.

“Yeah, well, someone didn’t let me get much sleep last night.” She winked at him.

“Um, sorry about that.” He crossed the kitchen, handing her a mug of coffee with cream and sugar. “I know that I can be a little demanding. I hope it wasn’t too much, baby.” He leaned in and kissed her. “How’s your coffee? I saw how you took it last night with dinner. Hope I got it right.”

God, she loved that he paid that much attention and took care of her. She went up on her tiptoes and kissed him.

“Yes, perfect. Everything was perfect. I can’t believe I’m saying this but I kind of like you being so bossy in bed. It’s hot when you talk dirty to me.” She started to sip her coffee, but he took it away from her. He put both of their coffees on the counter and pulled her into him.

“Well, I guess it’s good that you like me bossy because that is all I know how to be with you in my bed. Baby, I just couldn’t get enough of you. If I am being totally truthful, I’m hard right now.” He ground his erection into her stomach.

She decided a distraction was in order, if she wanted any kind of nourishment. Good Lord, but the man was built for sin.

“Do I smell bacon?” Yeah, that would work. He smiled, seeming to know her ploy of distraction.

“Yeah, I thought you’d be hungry after last night.” He winked at her and started to make her a plate.

“I can do that for myself,” she said, shooing him away.

“No, I like taking care of you, Karlie. You will just need to get used to me doing things for you.” She didn’t want to feel hopeful about what he just said. She didn’t want to read too much into their relationship or whatever this was that they were doing. But she couldn’t help but feel anything but hope in what he said to her. He wanted to take care of her.

She wrapped her arms around his waist and laid her head on his shoulder, pressing her front to his back.

“Mmm, baby, if you keep that up we won’t be eating breakfast.”

Her hands dipped lower, cupping his cock and rubbing him through his boxer briefs.

“Baby,” he growled, turning to lift her up to sit her ass on the kitchen table. He started kissing up her neck, standing between her spread legs.

“Wrap your legs around me,” he said, taking her mouth, hard, fast, licking and nipping her lips. “Fuck, you’re not wearing underwear!”

She smiled at his realization. He seemed to pick up speed, pulling down his boxers and sliding past her slick folds.

“This is better than breakfast anyway,” Karlie purred, as Drew lifted her T-shirt up, exposing her breasts. 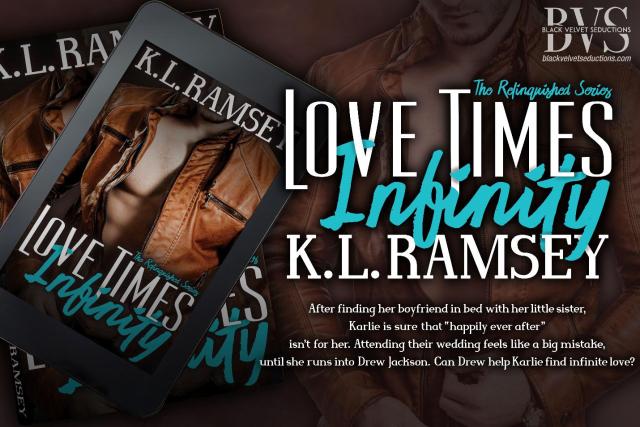 K. L. Ramsey currently resides in West Virginia (Go Mountaineers!). In her spare time, she likes to read romance novels, go to WVU football games and attend book club (aka-drink wine) with girlfriends.
K. L. Ramsey was born and raised in Maryland where her life changed when she signed up for a creative writing class. Knowing that someday she wanted to become a writer, K.L. received her BA in English from Salisbury State University.
Somewhere in her mid-forties, K.L. decided to write her first romance novel, proving that dreams can be realized at any age.
Facebook ✯ Instagram ✯ Twitter ✯ Goodreads ✯ Amazon