I am a big fan of Victoria Dougherty and her Cold Noir Writing. Having met her in person in Prague, the city with a Cold War history, and scene of her amazing book “The Bone Church” , d…

Source: Review: “Welcome to the Hotel Yalta” by Victoria Dougherty

END_OF_DOCUMENT_TOKEN_TO_BE_REPLACED

Two years after her husband’s death, Kelly believes her romantic life is done. Until she reconnects with her girlhood crush on social media, and as fate would have it, he lives across the street.

James is over the whole true-love thing. His grasping ex-wife tore that belief out of him, when she left him for a rich, old man. Then he finds out his first love moved to San Diego too, and their attraction burns as hot as ever.

What they don’t know is that Fate didn’t bring them together – the Guardian Angel Corps did, led by two unlikely Cupids – Kelly’s late husband and Zane, a rough and tumble, 19th century cowboy. When a Fallen Angel decides to tear Kelly and James apart, cherubs and harps aren’t going to cut it, and Zane’s unique skills might be just what they need to get a second chance at their first love.

James held Kelly’s hand as he walked her to her apartment building from his car. While they were still in shadows, before they reached the bright light of the entrance, James stopped and turned to face Kelly. He cupped her face in one of his big, rough hands and rested the other lightly on her waist. He traced her cheekbone with a feather light touch of his thumb, and Kelly couldn’t help but turn her face into his hand like a kitten. She did manage to stop herself before she purred, and was pretty darned proud of that achievement.

She felt his hand at her waist tighten, and he dropped his forehead down to rest against hers. When he spoke his voice was low and gruff with emotion.

“Tell me to leave right now, Kel, or all my good intentions to go slow this time are flying out the window, and I’m going to ask you to invite me up to your condo.”

Kelly’s voice was quiet. “I’m not ready for that yet.”

He left his forehead resting against hers, but rubbed his head slowly back and forth. “I know. I should just go, but I can’t bring myself to leave.”

Kelly swallowed, and extended an olive branch, since she wasn’t ready to call it a night yet either. “I think I’m ready for a kiss, though.”

He lifted his head away from hers, and the happiness and blatant hope in his voice made her smile. “Yeah? Really?”

“Yeah,” she replied and stood on the tips of her canvas deck shoes to bring her mouth closer to his.

James bent his head and pressed his lips gently to hers.

Her heart pounded and her blood heated in her veins. It had been such a long time since a man had kissed her—and this was James Flynn. Her first love. She snaked her arms up around his neck and pressed her body closer to his. 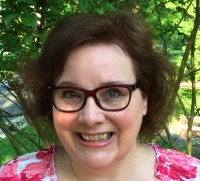 After years working in the business world, my love of reading led me to get my MLS, and I currently work part-time in a school library, a job that allows me lots of time to explore my other love – writing romance! I live in Maryland, with my husband, who is my real-life romance hero. We both enjoy traveling to visit our far-flung family and friends, and spending time on the beach with an umbrella drink and a good book.

Genre: Contemporary Fiction
About the book
Graphic artist Trinity Hargrove never knew real passion until she sleeps with her boss’s son. Mistake number one. Mistake number two…liking it too much. But they agreed to only one night. Simple enough, right? Wrong. He may be out of her bed, but their intense night together still burns in her memories. As long as she keeps her distance from the oh-so-desirable Xander Duval, everything will be okay. Unfortunately, fate won’t go along with her plan.
Restaurateur Xander Duval agrees to Trinity’s “one night” stipulation, but only in theory. He has no intentions of not being with her again. Especially when his mind—nor body—will allow him to forget the fire that blazed between them until the wee hours of the morning. When Trinity is injured in an automobile accident, he jumps at the opportunity to be her arms and legs. He plans to show her just how determined he is to make her his…for far longer than just one night.
Amazon link
5.0 out of 5 starsGreat read

Verified Purchase
Loved, Loved this book. Sometimes it’s hard to trust again after being hurt. In this story you showed how to slowly put your guard now. She also helped me remember what grandma said growing up, “be careful because that best friend can turn into your worse enemy”. When’s the next book coming I have read all your books and loved them all.

I am a huge fan of Ms. Avery. I loved the chemistry between Trinity and Xander and the fact that they both had issues. Xander is the man. He was there for Trinity from the very beginning. Helping to heal her heart. Love him!! Great job!
About the author

to imaginary worlds—creating characters whose romantic journeys invariably end happily ever after.

Since she was a young girl growing up in Garner, Joy knew she wanted to write. Stumbling onto romance novels, she discovered her passion for love stories; instantly, she knew these were the type stories she wanted to pen.
Real characters. Real journeys. Real good love is what you’ll find in a Joy Avery romance.
Joy is married with one child. When not writing, she enjoys reading, cake decorating, pretending to expertly play the piano, driving her husband insane, and playing with her two dogs.
Joy is a member of Romance Writers of America and Heart of Carolina Romance Writers.

What does crazy look like? Let Deborah tell it, it’s the reflection that looks back at her in the mirror. She has a career she loves, two beautiful children and a handsome and successful husband. Her life seems to be the blueprint almost every woman she knows would kill to live. But working full-time, being a full-time mother, full-time wife and a full-time Sunday only Christian seems to be taking its toll on her. With all the scheming and shenanigans Deborah orchestrated to get this lifestyle, she might have to come up with a whole set of new ones to maintain it.
Lynox is Deborah’s husband who she thanks God for putting back into her life after a game of cat and mouse that defies the laws of romance. He feels that all Deborah needs is to let her hair down, maybe make some new friends and live a little. When Deborah agrees and then suspects Lynox of having an affair with the woman that he suggested she form a friendship with, will he live to regret his own advice?
Buy link
About the Author
Joylynn M. Ross now writing as
BLESSEDselling Author E.N. Joy (Everybody Needs Joy)

BLESSEDselling Author E. N. Joy is the author behind the “New Day Divas,” “Still Divas,” “Always Divas” and “Forever Divas” series, all which have been coined “Soap Operas in Print.” She is an Essence Magazine Bestselling Author who wrote secular books under the names Joylynn M. Jossel and JOY. Her title, If I Ruled the World, earned her a book blurb from Grammy Award Winning Artist, Erykah Badu. An All Night Man, an anthology she penned with New York Times Bestselling Author Brenda Jackson, earned the Borders bestselling African American romance award. Her Urban Fiction title, Dollar Bill (Triple Crown Publications), appeared in Newsweek and has been translated to Japanese.
After thirteen years of being a paralegal in the insurance industry, E. N. Joy divorced her career and married her mistress and her passion; writing. In 2000, she formed her own publishing company where she published her books until landing a book deal with St. Martin’s Press. This award winning author has been sharing her literary expertise on conference panels in her home town of Columbus, Ohio as well as cities across the country. She also conducts publishing/writing workshops for aspiring writers.
Her children’s book titled The Secret Olivia Told Me, written under the name N. Joy, received a Coretta Scott King Honor from the American Library Association. The book was also acquired by Scholastic Books and has sold almost 100,000 copies. Elementary and middle school children have fallen in love with reading and creative writing as a result of the readings and workshops E. N. Joy instructs in schools nationwide.
In addition, she is the artistic developer for a young girl group named DJHK Gurls. She pens original songs, drama skits and monologues for the group that deal with messages that affect today’s youth, such as bullying.
After being the first content development editor for Triple Crown Publications and ten years as the acquisitions editor for Carl Weber’s Urban Christian imprint, E. N. Joy now does freelance editing, ghostwriting, write-behinds and literary consulting. Her clients have included New York Times Bestselling authors, entertainers, aspiring authors, as well as first-time authors. Some notable literary consulting clients include actor Christian Keyes, singer Olivia Longott and Reality Television star Shereé M. Whitfield.
You can visit BLESSEDselling Author E. N. Joy at
www.enjoywrites.com
or email her at
enjoywrites@aol.com.

Human beings have a thing about permanence, about roots and foundations. We like knowing where we belong, and many of us drift through life looking for “home” with a capital H, a place in which to …

Source: The impermanence of permanence