Joe Bonadonna  has  published a number of short stories, and authored five novels, and five screenplays. He is a former board member of the Chicago’s Screenwriter Network, where he lectured on the history of science fiction, horror, and fantasy in films, as well as on writing screenplays.
Joe is  also a former rock and roll guitarist and songwriter from the Golden Age of 1964-1984.

While writing the six novellas that comprise Mad Shadows: The Weird Tales of Dorgo the Dowser, I never thought about that. I was just writing heroic fantasy tales, and trying to do something different. It wasn’t until I started proofing the manuscript that I saw the common thread, the theme that runs through each story: loss, the loss of wealth, friendships, lovers, and even self, and the death of friends and family. In spite of all that, there is a lot of humor in my stories . . . gallows humor, to be sure. Most of the humor comes through via the dialog and interaction between characters, although there are a few scenes of “physical” comedy.

Oh, indeed! Five of the six stories are written in first-person, so Dorgo the Dowser’s character is very much me. A little girl in one story is based on a friend’s daughter —her mannerisms and the way she talks. Other characters are based on friends and family. Even my satyr and centaur are based on a couple of street-wise tough guys I know. As for the werewolf . . . the less said about him the safer I’ll be.

Ah, far too many to name! Fritz Leiber, Raymond Chandler, and Dashiell Hammett are the main three. There’s a bit of Charles Dickens and Victor Hugo in Dorgo’s world, too. Many people have found it interesting that the heroic fantasy of Mad Shadows was also influenced by the Warner Brothers gangster films of the 1930s, and the film noir that followed in the 40s and 50s. There’s a lot of Humphrey Bogart in Dorgo the Dowser.

Coffee. Lots of coffee. Then I make a Virgin Mary with 2 stalks of celery, three drops of green Tabasco sauce, and half a teaspoon of horseradish all tossed into a blender. This is, of course, followed by more coffee. Sometimes I’ll eat some oatmeal . . . when and if I remember to eat.

Yes. She won’t tell me her name, however. Maybe she fears that if I knew her name, I’d have some kind of magic power over her. She runs away quite a lot — I suspect she’s cheating on me with some other writer. But she is, after all, a very free spirit.

Besides working on two novels featuring Dorgo the Dowser, I am fortunate and very grateful to be writing for Janet Morris’ Heroes in Hell series, as well as having a story in her Heroika 1: Dragon Eaters. I really enjoyed killing and eating dragons. And I certainly have a helluva time writing in Hell, hanging out with my characters and letting them have their way with me. I think I’ve found a home in the underworld. As Mark Twain once said, “Heaven for the weather, Hell for the company.”

My other two novels are the space opera, Three Against The Stars, and the pirate-fantasy adventure, Waters of Darkness (co-written with David C. Smith.) All my books, including the anthologies in which I have stories and those I have edited for other writers can be found on Amazon, in both paperback and Kindle editions. Mad Shadows is also available in hardcover and Nook editions.

Three Against The Stars — Space Opera.

Griots: Sisters of the Spear. Sword and Soul Heroic Fantasy. Created by Milton Davis and Charles Saunders. Published by MVmedia. Featuring “The Blood of the Lion,” by Joe Bonadonna.

Poets in Hell — Bangsian Fantasy, Volume 17 in the Heroes in Hell series, created by Janet Morris. Published by Perseid Press. Featuring “Undertaker’s Holiday,” by Joe Bonadonna and Shebat Legion, and “We the Furious,” by Joe Bonadonna. 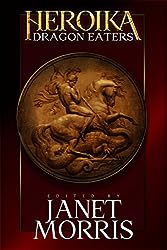 COMING SOON:
Doctors in Hell, volume 18 in the Heroes in Hell series, created by Janet Morris. Published by Perseid Press. Featuring “Hell on a Technicality,” by Joe Bonadonna.      BOOKS JOE HAS  EDITED:  (we excluded Erotica) Hello, My Name is Max and I Have Autism, by Max Miller. Published by Authorhouse. Essays and artwork written and drawn by 13 year-old Max Miller, edited by Joe Bonadonna.