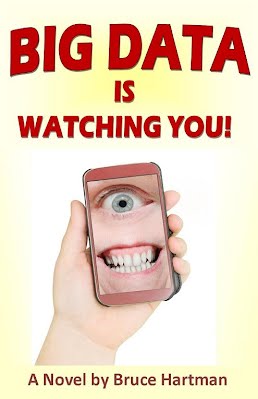 It’s way past 1984.  Your toothbrush, your coffee maker and your Rice Krispies are running your life.  But don’t worry… BIG DATA IS WATCHING YOU!
Welcome to Goozle Earth®, a dystopia where the all-knowing and all-powerful force of Big Data rules humanity through the Internet of Things and the corporate power of Goozle Inc.  Where English® and every possible combination of words has been copyrighted and the only law is the Terms of Service, which has been replaced by the Terms of Servitude.  Where the proudly psychopathic Higgs, Caesar and Emperor Omnipotent (CEO) of Goozle Inc., is determined to launch the Next Big Thing.
Smith, a happy native of this paradise, wanders off the grid and discovers sex®, the knowledge of good and evil, and the pursuit of Happiness. Can he save the human race from the Next Big Thing?
EXCERPT
Smith stared back in confusion when Julia said he was living in a dystopia.
“A dystopia?” he repeated. The word was new to him. “What do you mean?”
They were somewhere in the Green Mountains, walking on a dirt road through a strangely silent woods. That was all Smith knew. He’d lost his way in the hills, his car stopping short where a huge fallen tree blocked the road. The woman who introduced herself as Julia climbed over the fallen tree before he could tell his car to turn around. Surprisingly, she offered to walk him into the nearby village to find something to eat. The eerie silence followed them into the village, swallowing his thoughts. Julia looked different from anyone he’d ever seen, though she had (he soon realized) the same blond hair and blue eyes and the same awkward gait as everyone else in the village. The others—he noticed half a dozen villagers cutting weeds or stacking firewood around a row of decaying frame houses—weren’t nearly so friendly as she was. Most of them turned away or receded into the shadows rather than to look at him. Some of them, he realized with a start, had beards.
“It’s a society where, basically, life sucks,” she explained. “You have no freedom or privacy. You can’t do anything, you can’t say anything, you can’t even think without somebody spying on you or listening in.”
Smith didn’t want to seem condescending, but he couldn’t help feeling superior to the crouching lowlifes he’d noticed slinking away as Julia led him into the village. These were apparently her neighbors. Who was she to cast aspersions on his life in Goozle Earth?
“My life doesn’t suck,” he said, smiling as always. “In fact, I can’t imagine being happier than I am. I have a good job at Celebrity Solutions, a nice condo, hundreds of friends, and two wonderful pets. Everything I want is delivered to my door within thirty minutes by an Amazzond drone.”
Julia laughed. “Guess who drank the Kool Aid!”
“Kool Aid?” Kool Aid® was Smith’s favorite beverage.
“Try thinking an original thought and see what happens.”
He stared back uncomprehendingly.
“You know,” she teased. “Say something more than 140 characters long.”
What was she talking about? Did she seriously expect him to violate the Terms of Service? She spoke fluent English® but used words he’d never heard before, like “freedom” and “privacy.” He’d heard that connectivity could be poor in rural areas, where the inhabitants—known as “Yahoos”—often expressed eccentric, paranoid ideas. Obviously, for whatever reason, he and Julia weren’t connecting. Still, there was something about her that affected him in a surprising, unfamiliar way. He later learned that it was called “sex®.”