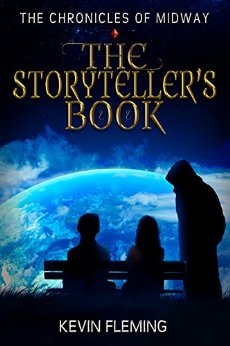 “…you must realize and accept, neither me, your mum, nor either of you are human.”

Nick and Mel are 14 year old twins living normal lives with their parents. When they discover an ancient book in the attic and read from it, strange events begin to happen around them. Something has been awakened which prompts their parents to take them away to a town called Midway where they reveal to the twins that they are not human. They had been hidden on Earth, brought up as though they were human, awaiting the right moment for the truth to be told.

When their parents mysteriously disappear on their first night away, they are forced to discover for themselves what their roles are in the new lives they’ve been thrown into. They struggle alone as they try to understand and balance their past human lives with their alien destiny. When the book they discovered at their home is stolen, it falls on the twins to recover it. The book has a lot more power than they realised, and if they fail, it will not be they who suffer, but the whole human race.

Kevin Fleming has lived in Liverpool, England, all his life, born into a family with roots in Ireland, Yorkshire and London. All his family apart from he and his wife have long since left Liverpool to spread across the globe, even as far as New Zealand. He feels as though his ancestors all congregated in Liverpool, dropped him off then quietly left.

Even as a child he wanted to write a book but never had the patience to continue beyond the first page. Despite many more failed attempts through his teens, the thought of completing a novel stayed with him as an adult working in telecommunications and afterwards running his own business. In 2012 he decided he’d been employed enough for one lifetime and concentrated on writing.

After all the years of trying, ‘The Storyteller’s Book’ finally arrived, quickly followed by ‘The Mines of Kothkish’, ‘The Warlords of Shreen’ and finally ‘Carnival of the Otherworld’, to form the series, The Chronicles of Midway.

Married for over thirty years, he has a daughter and son who have now left home and are building lives for themselves elsewhere in England.