Patrick Temple Hickey has written for TV shows on BBC and Ireland’s RTE. He contributes editorial and single panel cartoons to various newspapers and magazines all over the world and has graphic stories published in independent anthologies such as Slambang, The Shiznit and Don’t Touch Me. His first YA SCi FI novel, The Nostradamus Code, was published with Double Dragon Publishing in July 2017. 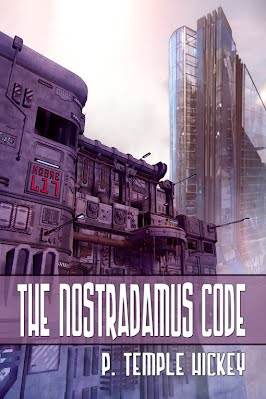 YA Sci-Fi Thriller
Published: July 19, 2017
Publisher: Double Dragon Publishing
On a settlement planet far into the future the worldwide economic crash has turned New Stockton into a city broken by political corruption and pervasive organized crime. Scotland Murrow’s journalist father has gone missing while investigating a twelve year old murder case. The victim was found with an encrypted file, known as the Nostradamus Code, imbedded in his thumbnail leading Scotland to believe that the file contains the secret to his father’s fate. Aided by his reformed junkie friend and a journalist who may have her own secret agenda Scotland scours the city’s seedy underbelly, traverses the unchartered outlands and breaches a fortified Citadel as he peels away layer upon layer of the Nostradamus Code to confront his biggest fears and uncover a plot to bring down the most powerful man on the planet.
Contact Links
www.patricktemplehickey.com
@toontemple
goodreads.-The Nostradamus Code
Purchase Links
Amazon
B&N
Kobo
iTunes
Publisher: Double Dragon-ebooks.com