The disco zombie from Studio 54

My middle daughter, who’s fifteen, is pretty crackerjack at horror make-up. Ever since going to theater camp when she was eleven and taking a special FX class, her Halloween costumes have been killer.

But it’s my twelve year-old daughter who really loves horror. She binge-watches anything from Twilight to the Halloween franchise, devours Stephen King, and writes her own stories all the time – often from the point of view of some deranged, but charming psycho. Nothing goes too far or is off limits for her. Not demonic possession or vomit-inducing gore or heinous monsters or wicked cults. And she sleeps like a baby at night. Go figure.

This girl is fearless.

I watch her with a mix of envy and awe. I’ve always been fascinated by horror. The sneaky way in which it toys with our psyches, revealing even the most oh, so… 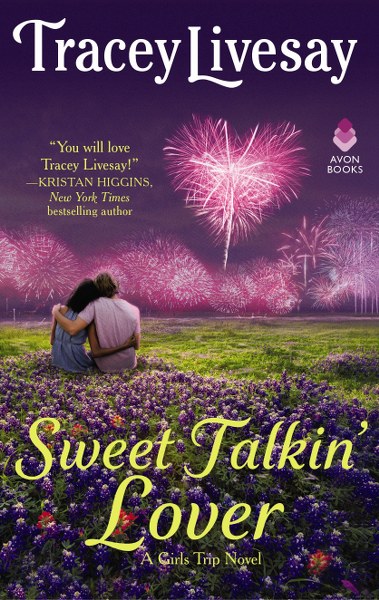 Tracey Livesay delivers the first novel in her sexy new series about lifelong friends and unforgettable love stories.
When everything is on the line,
surrendering completely to love is your only choice…
Marketing manager Caila Harris knows that the road to success in the beauty industry doesn’t allow for detours. She’s forsaken any trace of a social life, working 24/7 to ensure her next promotion. When grief over her grandfather’s death leads to several catastrophic decisions, Caila gets one final chance to prove herself: shut down an unprofitable factory in a small Southern town. But as soon as she arrives in Bradleton, she meets one outsized problem: the town’s gorgeous mayor.
Wyatt Bradley isn’t thrilled about his nickname, Mayor McHottie. He’s even less happy to learn that his town might be losing its biggest employer. If he has to, he’ll use some sneaky tactics to get Caila on his side. Yet even as he’s hoping she’ll fall for Bradleton, he’s falling too—right into a combustible affair that shakes them both with its intensity.
Two stubborn people, torn between loyalty, ambition, and attraction. But when you’re willing to give it your all, there’s no limit to how far love can take you…
Add to Goodreads
Amazon * Apple * B&N * Google * Kobo

Tracey Livesay’s latest release is Love Will Always Remember. She writes smart, sexy and emotional contemporary romances where strong, successful heroines find love with powerful, passionate heroes. She’s past president of Virginia Romance Writers, volunteers on several national committees for Romance Writers of America and is a member of their Published Author’s Network. She’s been featured in Entertainment Weekly, The Washington Post and on CBS This Morning. A former criminal defense attorney, she finds crafting believable happily ever afters slightly more challenging than protecting our constitutional rights, but she’s never regretted following her heart instead of her law degree. Tracey lives in Virginia with her husband-who she met on the very first day of law school–and their three children. When not answering the call of wife, mother or author, she runs marathons and daydreams about designer purses.
Website * Facebook * Twitter * Instagram * Bookbub * Amazon * Goodreads