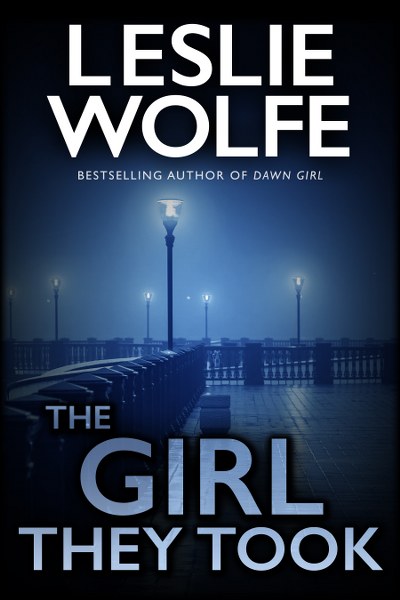 Where her daughter had played Gretel in front of a cheering audience, only two faint stage lights remained. The theater was deserted and eerily silent; the only sound she could hear was her own heart, pounding in a frenzy against her chest. She rushed outside and stopped sharply at the top of the stairs, stunned, her blood turned to icicles. Darkness had fallen, thick and filled with ocean mist, lampposts like ghosts sprinkling yellow haloes in the sky.
Paige was gone. They’d taken her little girl.
“Wow. I think I just fell head over heels in love with a fictional character. Tess Winnett is one of the smartest FBI agents and profilers I have come across yet and with analytical skills to rival Sherlock Holmes. Hats off to Leslie Wolfe for easily the best thriller I have read in this genre for many, many years!” – Manie Kilianon ⭐⭐⭐⭐⭐
The girl: taken
After eight-year-old Paige disappears without a trace, FBI Special Agent Tess Winnett is called to investigate one of the boldest kidnappings the bureau has seen. The girl was taken from a theater filled with witnesses, in the middle of a children’s play. And no one saw anything.
Starting a frenzied search and following leads that seem to suggest a link to the girl’s father, the state district attorney, Tess is stunned to learn of a ransom call that points to an entirely different motive, old as time itself: money.
The first twenty-four hours: critical
Frantic for answers and painfully aware of each passing moment, Tess has a choice to make: trust her instinct and follow the leads that seem to indicate an organized crime connection? Or give in to the demands of the parents and assist with the ransom payment?
The odds of finding Paige alive drop with every passing second, and making the wrong choice would seal her fate. Her blood would be on her hands.
The best-selling author of Dawn Girl is back with another suspenseful, gripping crime thriller. If you’re a fan of David Baldacci, Melinda Leigh, and James Patterson, you will enjoy Leslie Wolfe’s enthralling police procedural that will keep you reading until the early morning hours.
What Readers and Reviewers Are Saying About Leslie Wolfe
“Leslie Wolfe has a wonderful ability to make you feel as if you were right there watching the events unfold in this fast paced and nail-biting thriller.” ⭐⭐⭐⭐⭐
“Wolfe’s strong female characters, who all appear to be flawed, never disappoint.” ⭐⭐⭐⭐⭐
“The action is immediate and nonstop, and just when you think you have it all figured out, Wolfe tosses in a twist so masterful that it’ll make your head spin.” ⭐⭐⭐⭐⭐
“Wow… Leslie Wolfe is an incredible storyteller. Can’t wait for more of Agent Tess Winnett.” ⭐⭐⭐⭐⭐
“When an author spins a story that draws you in and keeps you drawn in until you finish the book, you know you will enjoy reading anything written by that author!” ⭐⭐⭐⭐⭐
“Leslie Wolfe’s books draw you in, take you along for the ride and finish with your appreciation of a strong woman! Her books leave you satisfied, yet wanting more!” ⭐⭐⭐⭐⭐
“Leslie Wolfe has an uncanny ability to bring strong, endearing female leads to life.” ⭐⭐⭐⭐⭐
“Geez! I couldn’t put this one down! I instantly liked Winnett and her bad attitude. I found it a little refreshing that she wasn’t all warm and fuzzy.” ⭐⭐⭐⭐⭐
“Leslie Wolfe’s books are riveting. Her stories keep you glued to the story with always a surprising ending.” ⭐⭐⭐⭐⭐
“Twist upon twist. You won’t be able to put this down.” ⭐⭐⭐⭐⭐
“I can’t wait to read the next book in the series and other books by Leslie Wolfe!” ⭐⭐⭐⭐⭐
Goodreads * Amazon

Leslie Wolfe is a bestselling author whose novels break the mold of traditional thrillers. She creates unforgettable, brilliant, strong women heroes who deliver fast-paced, satisfying suspense, backed up by extensive background research in technology and psychology.
Leslie released the first novel, Executive, in October 2011. Since then, she has written many more, continuing to break down barriers of traditional thrillers. Her style of fast-paced suspense, backed up by extensive background research in technology and psychology, has made Leslie one of the most read authors in the genre and she has created an array of unforgettable, brilliant and strong women heroes along the way.
Reminiscent of the television drama Criminal Minds, her series of books featuring the fierce and relentless FBI Agent Tess Winnett would be of great interest to readers of James Patterson, Melinda Leigh, and David Baldacci crime thrillers. Fans of Kendra Elliot and Robert Dugoni suspenseful mysteries would love the Las Vegas Crime series, featuring the tension-filled relationship between Baxter and Holt. Finally, her Alex Hoffmann series of political and espionage action adventure will enthrall readers of Tom Clancy, Brad Thor, and Lee Child.
Leslie has received much acclaim for her work, including inquiries from Hollywood, and her books offer something that is different and tangible, with readers becoming invested in not only the main characters and plot but also with the ruthless minds of the killers she creates.
A complete list of Leslie’s titles is available at https://wolfenovels.com/order.
Leslie enjoys engaging with readers every day and would love to hear from you. Become an insider: gain early access to previews of Leslie’s new novels.
Website * Facebook * Twitter * Instagram * Bookbub * Amazon * Goodreads