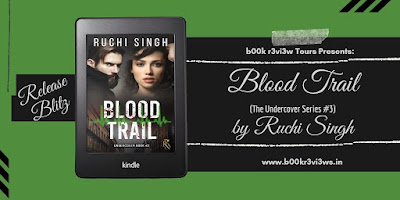 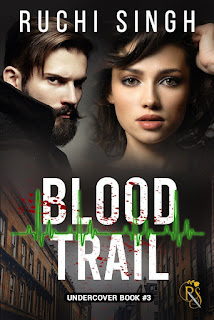 Trisha is mortified as a stranger flirts with her at a society party. The very fact that he singles her out, and she gives in to her pent-up desires and attraction towards the handsome stranger, lands her in a soup so deadly that it brings danger and death to her doorstep.
Coming out of a brutal undercover assignment, busting the spine of a major illegal drug cartel, Armaan is looking for some peace and quiet. Instead his path coincides with Trisha Mehra. Sparks fly. As do bullets too.
By sheer coincidence, when they meet again, they have an accident. Again!
And IB agent Major Armaan Joshi does not believe in coincidences.


Another standalone novel under Undercover series, yet connected in spirit, from the author of bestsellers ‘The Bodyguard’ and ‘Guardian Angel’…

Read an Excerpt from Blood Trail

His eyes habitually scanned the view outside the hall and did a double-take. A figure in a black dress stood at the edge of the pool. Slim calves encased in multiple, thin, silver straps of her heels invited him like no other. She stood pensively staring at the water shimmering in the pool. Curiosity had him peeling himself from his post at the corner of the hall and start toward the exit leading to the pool.
Maybe he would get lucky in all the areas today.
Without taking his eyes off her, he exited the big room. She appeared to be deep in her thoughts staring at the blue water that rippled with the slight garden breeze.
“Hope you are not thinking of diving in?”
She gasped and turned around. “Beg your pardon!” Her eyes big on her lean face.
He couldn’t help but smile at her ‘convent-educated’ reaction. The garden lights cast a shadow making her look enigmatic and royal. Tall and slim with a shoulder-length bob-cut framing her delicate face, she was almost his height in the sexy, foot-breaking heels. He was not used to women matching his height.
“I was just curious. You have been staring at the pool for quite some time. I wondered if you were having some self-destructive thoughts.” He smiled. The water in the pool was just two feet deep.
A shapely eyebrow arched sophisticatedly. “And you decided to come to my rescue?”
“No… no… please carry on.” He waved his glass in the air. “I have no intention of becoming a knight.”
“Wouldn’t that be anticlimactic since you sought me out to save me from my untimely demise?” Her eyes changed from being pensive to playful.
He suppressed a smile at the encouraging transformation. “So you do believe in heroes, in this era and age!” His own eyes glinted with an answering whimsy.
Ready with an answering retort, she opened her mouth, but her phone rang. She exhaled, threw an exasperated glance at him as if annoyed at the disruption and answered. “Yes… yes, of course, I’m coming.” She looked at him and stepped around, “If you’ll excuse me.”
He inclined his head, and she left. 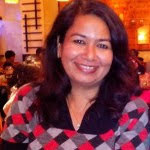 Author of the bestselling romantic thrillers, Ruchi Singh is an IT professional and novelist writing under Romance and Suspense genre. She is a bilingual author and writes in both Hindi and English.

Winner of the Times Of India WriteIndia Season 1, she began her writing career writing short stories and articles, which have been published on various forums. She has been a contributing author to a number of anthologies and has published many short stories under various genres. She has also won the Indireads Story Competition, in ‘crime’ genre.
A voracious reader, she loves everything—from classics to memoirs to editorials to chick-lit, but her favourite genre is ‘romantic thriller’. 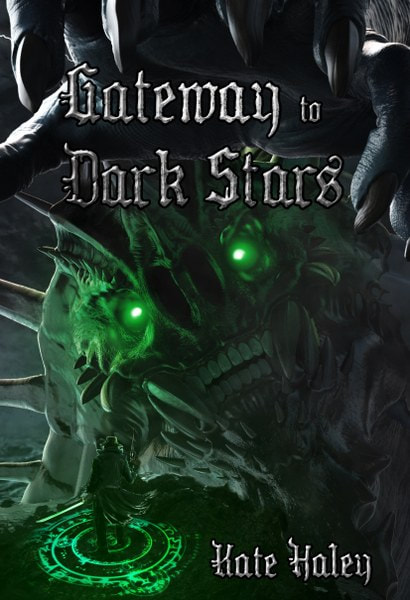 Slaying monsters. It ain’t much, but it’s honest work.

In the age of jazz and bootleg liquor, black magic is making a big comeback. Luckily, the scourge of demons and cultists are keeping Doctor Vincent Temple in business. Even the Mafia are having trouble with monsters, and they’ve hired Temple to sort it out. Cash is cash, and the old Doctor has never been one to turn his nose up at a job, no matter who’s paying. This time luck is smiling on him. The gangsters are tangling with a cult Doctor Temple has been stalking over a personal matter, but when reconnaissance turns into rescue can he save the world before things become too personal?

The Witcher meets Cthulhu in this gruesome, high-octane adventure. Snatch up your copy now and get ready to slay some demons! 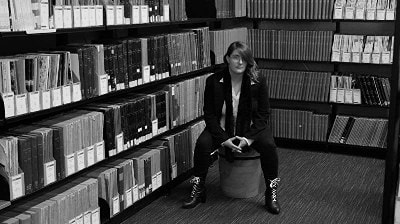 Kate Haley is a speculative fiction author who works predominantly in fantasy and horror.

While currently content to fill her days with writing and table-top RPGs, her grander plans involve world domination. Something akin to the tyranny of the greatest city atop the Disc would be an acceptable standard. She believes a super-villainous overlord would be an upgrade, given that our current villains lack style and imagination.

After all, super-villainy requires Presentation.

Personalized signed copy of the book & an art print of the lead character by the illustrator,