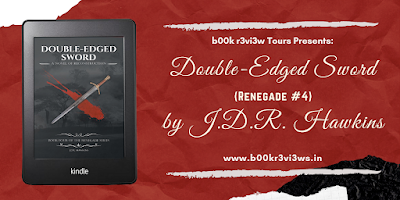 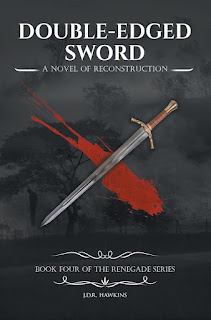 The Civil War has ended.

Confederate cavalryman, David Summers, returns home to Alabama, taking his new wife, Anna, with him. Upon arrival, he understands how much the war has changed him and has scarred his homeland. Faced with challenges of transition, he learns how to navigate his new world, along with the pain and trauma of his past. He is also forced to confront his foes, including Stephen Montgomery. Their hatred for one another inevitably boils over into a fierce confrontation, whereby David is arrested.

Will the jury believe his side of the story, even though he is an ex-Confederate? Or will he be hung for his crime?

Read and Excerpt from Double-Edged Sword

David helped Anna down after tying the mule, and followed her inside. A lanky man who stood behind a counter looked up from the hotel register as they entered. David nodded to the man, led Anna into the dining hall, and sat down beside her at a small round table. Like before, the room was nearly unoccupied. Three Union officers sat in the far corner, drinking whiskey and smoking cigars. Two men stood near the back of the room. One was playing a fiddle while the other attempted to sing a slow ballad in a low, baritone voice. The room was bright with sunlight, and lace curtains hung over the long windows. A thin, balding gentleman with an apron wrapped tightly around his waist appeared, pencil and paper poised in his hands.
“How do,” he said softly. “What would y’all like to order?”
Anna smiled up at him, but he only stared back.
“Well,” she began, “what is your specialty?”
“And more importantly, how much is it?” added David.
The waiter laughed. “More than you can afford, I’ll wager!”
David chuckled. “We have two dollars. Bring us whatever that provides.”
He glanced at his wife, who glared at him.
“It ain’t Confederate currency, is it?” the man asked.
“Silver,” responded David.
The waiter grinned and walked off into the kitchen.
Anna was still glaring. “The money you earned in prison?”
David nodded.
“You should hold on to that, sweetheart. We might need it for something important.”
He smiled. “You’re important,” he answered. “You said you needed to eat, and I’m starvin’. What could be more important than that?”
The musicians began to play another melody, and the couple listened to the lyrics.
“We shall meet but we shall miss him, there will be one vacant chair.
We shall linger to caress him, while we breathe our ev’nin’ prayer.
When a year ago we gathered, joy was in his mild blue eye.
But a golden cord is severed. And our hopes in ruin lie.”
David couldn’t help but think of the loss of his best friend. The lyrics saddened him deeply, searing his soul, rekindling the painful remembrance of discovering Jake’s lifeless body on the battlefield. He drew a heavy sigh, and took his beloved’s hand.
“It’ll be all right,” she comforted.
He nodded in confirmation, relieved when the song finally ended and the musicians broke into a lively tune. 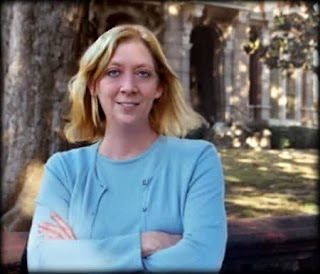 J.D.R. Hawkins is an Amazon, USA Today and Wall Street Journal bestselling, award-winning author. She is one of a few female Civil War authors, uniquely describing the front lines from a Confederate perspective. Her “Renegade Series” includes “A Beautiful Glittering Lie,” winner of the 2013 John Esten Cooke Fiction Award and the 2012 B.R.A.G. Medallion. The sequel, “A Beckoning Hellfire,” is an Amazon bestseller and winner of the 2022 B.R.A.G. Medallion. “A Rebel Among Us,” the third book in the series, is the recipient of the 2017 John Esten Cooke Fiction Award and winner of the 2022 B.R.A.G. Medallion. Double-Edged Sword is the newly-published, fourth book in the series. These books, published by Westwood Books Publishing, LLC, tell the story of a family from north Alabama who experience immeasurable pain when their lives are dramatically changed by the war. Ms. Hawkins has also published a nonfiction book about the War Between the States, titled “Horses in Gray: Famous Confederate Warhorses,” with Pelican Publishing.  She is a member of the United Daughters of the Confederacy, the International Women’s Writing Guild, Rocky Mountain Fiction Writers, and Pikes Peak Writers. Ms. Hawkins is also an artist and a singer/songwriter.