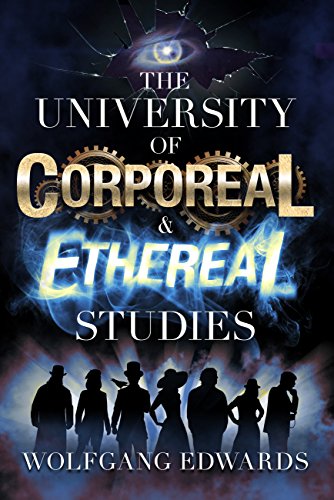 At the University of Corporeal & Ethereal Studies meddling with unknown powers can be dangerous work. Courses in arts and sciences experiment with supernatural forces to solve the mysteries of the universe, but when school projects go awry, the students may discover more than they would like to about the madness of the cosmic ‘Beyond’.
Eight interwoven stories follow students whose school work, social lives and inner demons crash together, leading to fantastic and horrible experiences, supernatural powers, and a fuller understanding of the dark depths of their world.
Classes include subjects such as time travel, alchemy, oneironautics , psychedelic transformation, rogue automatons, cosmic ghosts, reality-warping crystals, and more.
Inspired by many authors of science fiction, fantasy and horror, including H.P. Lovecraft, Edgar Allan Poe, J.K. Rowling, Neil Gaiman, William Gibson, Kurt Vonnegut and Isaac Asimov.

Wolfgang Edwards was born in Chicago, Illinois in 1987. He has been an aspiring writer since he was a child and intends to keep writing the rest of his life.

“Gods! I forgot the vicious insanity of being ambitious and young with other such people as my so-called friends!”

Her voice, strong as I remembered, rang out in the chamber – somehow clearer than anything I could recall hearing for some time. Her words cut through an invisible film that made the air thick and muffled.

Madam Armiarma’s wrinkled cheeks were more detailed than the hairs of the nearest mounted animal. The white of her bonnet shone more clearly than the candle lights all around us. Everything was more focused, with the old woman as the centre, radiating clarity itself. My mind was sharpened as by a jolt of caffeine shot straight into the brain.

“What is happening?” I asked, touching my face, feeling how firm and real it all had become. “Where are we?”

“Your dreams of course! And quite the telling dreams they are at that! You seem bright enough; a student taking on the forgotten art of Oneironautics and all, but really, dear, what kind of daft tart is so shallow and self-absorbed?” She berated me coolly.

Her strong voice was a formidable weapon when she wielded it so. The kindly old cupcake I met in the asylum had transformed into a bitter lump of coal.

“How dare you speak to me that way!” I snapped, surprised by my own lucidity. This is all a dream? A hint of dizziness twisted at the thought, “You may be my elder but you should remember your place, you mad old bat!”

Armiarma’s little eyebrows rose up into her bonnet, a deadly twinkle of amusement in her eyes, “Oh, I am more than just a mad old bat, dear.”

She was changing. There was no other word for it. I blinked and gasped as her body transformed – a smoother evolution than the ugly melding of Audrey and Valerie.

The little crone stretched, her round, squat form turning slender and tall.

Her ancient dress and bonnet flashed to new colours, shifting to new designs.

She wore a skin-tight black body-suit. The thin, fine lace left nothing to the imagination – except how anyone could don such a piece. It must have been sewn over her body, never to be taken off without ripping it to shreds.

“I am a master Oneironaut,” she informed me proudly.

It’s just a dream. I reminded myself, the concept less foreign by the second, I stood strong, unfazed, sneering up at her. “So, what of it?” was the best I could come up with.

The ground trembled in a subsonic bellow setting the very air aquiver. The vibration was so fierce I briefly hoped someone was shaking me awake and I would be freed.

I spun around at the rousing movements throughout the room. The taxidermy monstrosities were flexing and stretching like athletes preparing for exercise.

Twin rapiers were picked up by the speckled cat, its paws abruptly possessing opposable thumbs. Sharp, glowing green eyes turned on me with fury.

The darts guarded by the stuffed eagle took on a life of their own, flying in rapid circles around the bird of prey as it flapped giant wings to rise toward the ceiling.

With a snort the bison at the far end of the room pawed at the hardwood floor, rolling is neck – adjusting for the weight of the hand-cannon branching out between its massive horns.

“So?” The sharp, authoritative soprano inquired, “Your dreams are my domain.” 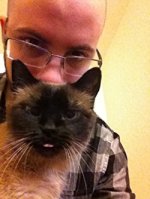 Wolfgang Edwards was born in Chicago, Illinois in 1987. He has been an aspiring writer since he was a child and intends to keep writing the rest of his life.