Fledgling police sketch artist Piper Cooke has always been different.
Gifted with second sight, but cursed with a life of tragedy, she has survived the feral streets of Dixon and has triumphed over her troubled upbringing. Piper faces her biggest challenge yet, however, when her visions compel her to disobey police orders and send her right into the wicked grasp of a madman.
Her life should’ve ended back in the blood soaked suburban basement, but it didn’t. Instead, the brutal trauma that should’ve been the end of her only makes her unique abilities stronger.
Years after her escape, a series of hideous visions force Piper out of hiding and back into the city that almost destroyed her years ago. Plagued by premonitions of doom, she finds herself compelled to track down Dixon’s most twisted serial killer yet.
Follow Piper through a horrifically unsettling labyrinth of family secrets, corruption and the sickening workings of humanity’s darkest minds. 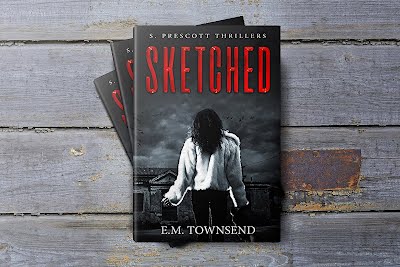 Excerpt
Chapter One
July 23rd 2012 12:35 pm
Dixon City – Suburbs
She had given up on the hope of surviving this.
Perhaps it was hours ago that the switch had been flicked in her brain, but it could have been minutes. It could’ve been days. Anything remaining of Megan’s sanity, that rational part of her that had the ability to form coherent thoughts had dissolved as quickly and completely as a sugar cube in a cup of scalding tea.
The only thing she knew now for sure was pain. It had taken over her mind, hand in hand with a kind of fear that she couldn’t have possibly comprehended before. It was a combination that no one survives to talk about.
Her world had been reduced to the basement she was being held in.
Beth.
She had assured Megan that the dealer was legitimate. The house had seemed safe enough. Nevertheless, a nervousness had blossomed the moment they stepped off the bus, and it had continued to grow in her stomach with every step the two of them had taken to the address Beth’s new online ‘friend’ had given her.
“C’mon Megan. Don’t be a chicken shit,” Beth had scowled.
Beth was scary when she was mad.
She always had been. Her narrow eyes and wiry red hair gave her an off-putting look that she’d used to her advantage since childhood. Beth had practically dragged Megan up the cracked concrete path that led to the house, her freckled arms so much more powerful.
There had been a dog barking in the background, she could remember that much. For some reason, its yapping had sent warning signals off all through her body, only increasing the tension that was building steadily inside her.
Megan had known that they were risking it by skipping school to buy drugs in the worst part of town. She’d seen enough horror movies to know that this was how all immoral teenage girls were punished. Instead of knocking on the door of a drug house, she should’ve been in first-period biology. But she wasn’t.
She hadn’t wanted to be chicken shit.
Megan blinked at the paneling and matted green carpet that decorated her prison. Beth had escaped. Of course she had, she had always been the stronger one. Thick boned and fearless like some kind of suburban Viking.
It hadn’t come as a shock at all when, through eyes clouded with tears, she saw Beth begin to successfully loosen her wrist bonds. Her skin had torn from the rope, and the blood that coated her hands like red satin gloves eventually helped her to slide free.
Beth hadn’t looked back at her when she slipped through the basement window. Her face had been so transformed with fear and outright panic that she looked more like a wild animal than a human.
It had been when Megan helplessly watched the soles of Beth’s sneakers disappearing through the casement window that the rational part of her mind had broken.
Two girls never escaped. There was always one left behind.
There was always one set of parents collapsing with grief in the background while the survivor’s family turned their elated smiles to the news cameras.
Megan Coogan, who had willingly allowed Beth to cheat off her in school almost daily. Megan Coogan, who had lied to Beth’s parents so that their daughter could make out with some nameless boy in the dusty corner of a playground.
That Beth would carry on, finish school, get married, get a job, maybe even have kids.
Megan Coogan would never leave this basement.
The sound of footsteps on the creaking stairs sent a surge of adrenaline through Megan’s system, drowning out her thoughts and causing her limbs to go rigid. Breathing heavily, she listened to the wood groan as he moved slowly down the steps, as if deep in thought.
The door opened carefully, and he stepped in the room.

E.M. Townsend is an incredibly talented writer who hails from the Great White North. This amazing wordsmith crafts intricate tales of horror and suspense that will keep you up at night. S. Prescott Thrillers has named E.M. Townsend as one of the hottest new novelists in the genre.
Contact Links
Website
Twitter
Facebook
Promo
Purchase Link
SALE $.99 from February 14-28
Amazon

One thought on “Sketched by E.M. Townsend”