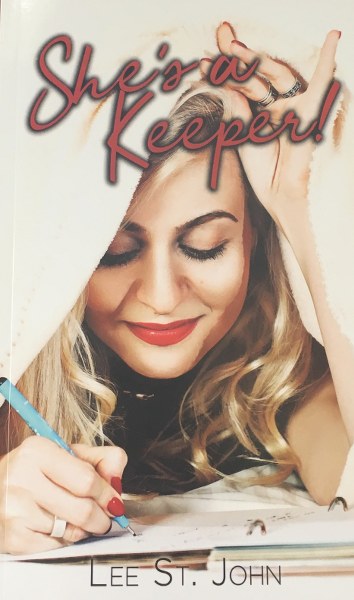 She’s a Keeper!
Cockamamie Memoirs from a Hot Southern Mess
by Lee St. John
Genre: Memoirs
Hold on to your pantyhose. It’s going to get rough.
My name is Lee St. John. I’m an unapologetic rogue Southern Belle. A
high-jinx expert and mayhem confessor.
With all the cotillion classes and etiquette lessons, I was taught manners
and how to behave. But all those years of learning and acting with
utmost decorum won’t stop me from saying what needs to be said.
Buy today to hear what I have to say about former Presidents, the Mafia,
famous people—dead and alive—as well as my own friends and family!
“Lee St. John is a natural born storyteller with loads of style, humor
and down home Southern Belle charm. And honey child, does she have
stories to tell!” – David Henry Sterry, bestselling author of Chicken:
Self-Portrait of a Young Man for Rent
Goodreads * Amazon

Author and humorist known for her Southern Charm, Lee St. John writes her
observational comedy columns for several Georgia newspapers and no
one is safe as she confesses and shares these observations in her
recent book, She’s A Keeper – Cockamamie Memoirs from a Hot Southern
Mess by Bienvenue Press. No one – and she knows a lot of people –
like Presidents of the United States, Professional Golf Champions,
National Football League Super Bowl Champs, and even tales about the
Mafia. Oh, and family and friends (even herself!)
A retired teacher, She’s A Keeper – Funny Teacher Stories from Real
Southern Classrooms tells the funny truths of what happened in
Southern schools. Again she spills it. What can they do? Fire her?
These stories awarded her the #1 ranking on Amazon’s Best Sellers under
Humor & Entertainment Essays Kindle e-books Short Reads.
Lee also is a popular and engaging guest speaker in the Southeast. She is
found on every dang social media outlet.
Born, bred, and still living in Georgia, this Peach has been married for 35
years to her Southern gentleman. Lee and her husband have two grown
sons and a tater-tot dog, Obie. Oh, and Lee loves to laugh.
Website * Facebook * Twitter * Instagram * Pinterest * Amazon * Goodreads