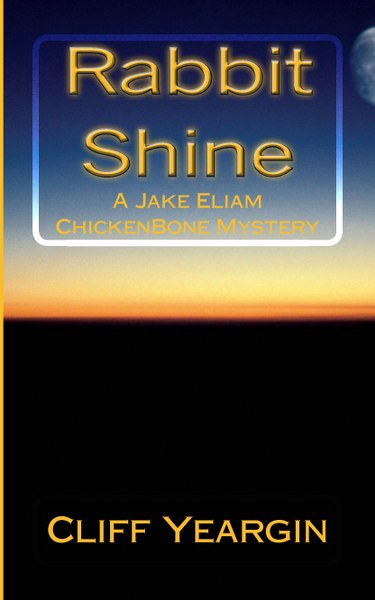 Jake Eliam spent a lifetime in baseball, until a chance turn that led him into the Atlanta neighborhood known as ChickenBone, where he ended up a part time private investigator thanks to a timely meeting with the man everybody called Catfish, the owner of the legendary 3 Pigs BBQ. When the top big league prospect for the Atlanta Peaches is killed in a car accident, the city mourns”. But was it an accident? So in between his part time job of making custom baseball bats in his shop in ChickenBone, Eliam is hired to find out the truth. Along the way he runs into a wealthy former member of Congress with a penchant for quoting scriptures, two rednecks named Tater and Booger, an ex-con hired killer who scrapes up dead chickens for a living, a tattooed stripper, a flop eared dog named Chance, and a former sheriff turned moonshiner. And the truth gets lost in a mix of greed, ambition, jealousy, regret, and murder. 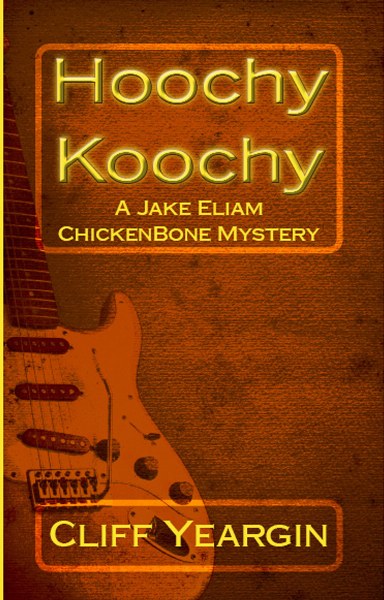 HOOCHY KOOCHY A Jake Eliam ChickenBone Mystery NAMED 1ST FINALIST IN THE 52ND ANNUAL GEORGIA AUTHOR OF THE YEAR AWARDS FOR MYSTERY/DETECTIVE NOVELS After a long season of making baseball bats all Jake Eliam wants to do is relax and watch the World Series. But when his friend Catfish calls with what he says is easy money, his other job as a Private Investigator intervenes. Catfish’s former fraternity brother is looking for his own payday if can reunite all the original players in his “One Hit Wonder”college band and is willing to pay big bucks to track down the one missing member, the lead guitar player. The only lead, his classic Fender that went missing at the same time. The trail meets up with a late night DJ, a beautiful hippie turned wealthy housewife, a stoned drummer with a shaky trigger finger, a mysterious son of the Dixie Mafia and a church where snakes are served up along side apple pie. The search ends up on a snake farm run by a fellow named Sweet Thang who has a penchant for old TV shows and speaking in rhymes. As secrets come crawling out like copperheads, Jake Eliam begins to think he just might end up a “One Hit Wonder” himself.

Reviewers rave about the characters and places in this entertaining new mystery series:

“Every page seems to breathe with life and atmosphere. The inside of Jake’s head is a wonderful place to be.” 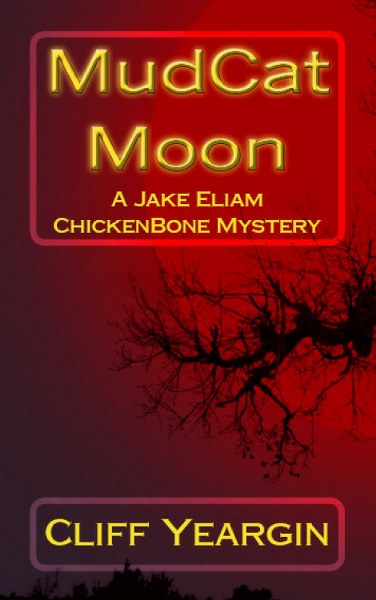 Billy Ray Kincaid is in the catbird seat. He owns a TV Sports Network that showcases Cissy, a sexy young sideline reporter and televises the top college football game each week. But the self proclaimed turnaround artist went cheap and now BTSN is about to go bust. Enter Jake Eliam, a lifetime baseball man, who scrapes by making baseball bats on the edge of a train yard known as ChickenBone. When cash runs low his best friend Catfish, the owner of the 3 PIGS BBQ, steps in with hot pulled pork, cold cash and work as a private investigator. When Alabama faces Georgia in the biggest game of the year, Catfish wrangles Jake to play bodyguard to Cissy who is the subject of an unusual stalker. The easy payday soon turns into a blocked punt of greed and deception. As the trail winds to the old Dixie Dew Pickle Factory in the North Georgia mountains, Jake rounds up his friends and a team of misfits including a drunken former Bulldog they call Dumptruck and a reclusive ex-con named Boobytrap. His ragtag team has time to run one last play on 4th and long or end up permanently benched.
*************
From the author of HOOCHY KOOCHY The 2016 Georgia Author of the Year Silver Medalist Finalist comes another SOUTHERN FRIED MYSTERY 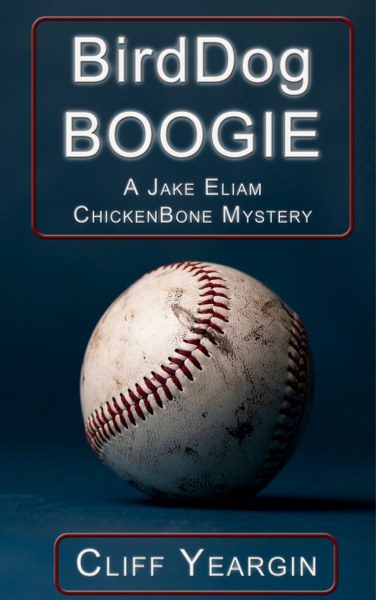 The latest in the Award Winning ChickenBone Mystery Series

Sammy ‘Shoestring’ Stubbs wasn’t a very good Major League ballplayer, but he was a Hall of Fame thief. During his short time in the big leagues, Shoestring stole every piece of baseball memorabilia from teammates and opponents that he could get his greedy hands on. Back home in Georgia, a nasty poker game turned into a double murder and Shoestring and his loot disappeared. Decades later, the scout who signed him has a lead on where it all might be hidden. Enter Jake Eliam, a former player turned PI, who teams up with an odd cast of characters that would rival any baseball team to track down the treasure. The cast includes his best friend Catfish, a wise worm farmer, a nosy reporter who dresses like a surfer, a bounty hunter named after Jerry Lee Lewis, a strip club owner that resembles the Fat Elvis and a guide famous for burning down a burger joint. Toss in a 150 year old ghost along with deep secrets hidden beneath a mysterious and dangerous shoals and you have got yourself one Southern Fried BirdDog Boogie. 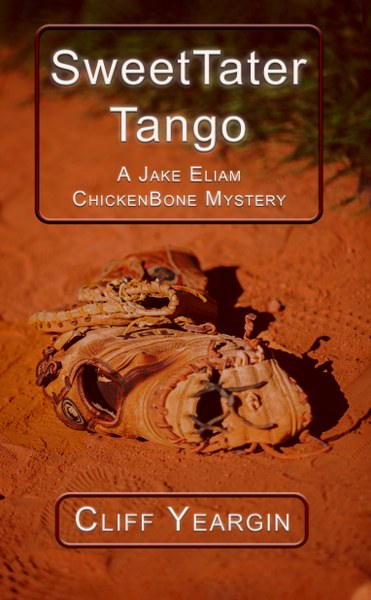 Catfish Wilson is a football man, Jake Eliam a baseball man. But when the Southern Nights Baseball League needs investors, Catfish switches sports to become part owner of the Tully City TaterHeads. Despite sensing a bad mojo, Jake signs on as Manager for a fat paycheck. The brains behind the league, Billy Bonz, cares more about pig races and ticket gate monkeys than baseball. During the season’s biggest promotion, a legendary car from a famous TV show barrels through the outfield fence and disappears into the night. Jake is forced to form a new team to find the car or everybody goes home broke. The lineup includes Sugar, a Smokey & The Bandit wannabe. BoDilly, an ex-con who hangs out with a beer-drinking hog, and his pals, Polecat and RoadKill. This team of misfits faces some high heat from a mean backwoods clan, a corrupt sheriff, and the Tully City Peanut King. With two out in the ninth, they have one last chance to steal a win or end up on the wrong end of a suicide squeeze. 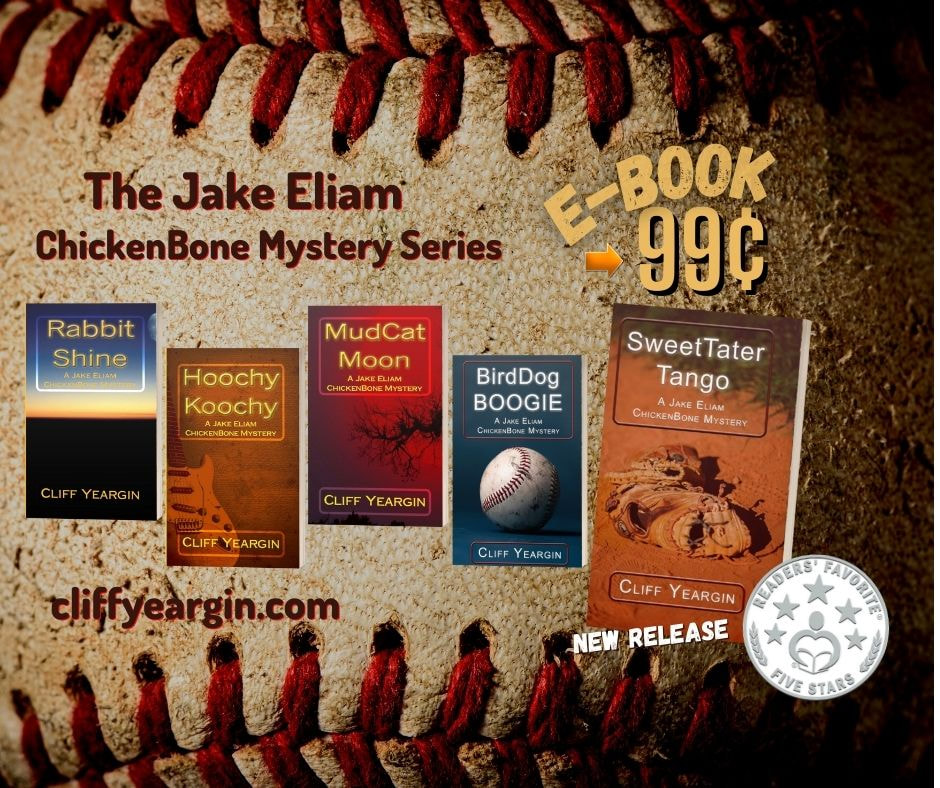 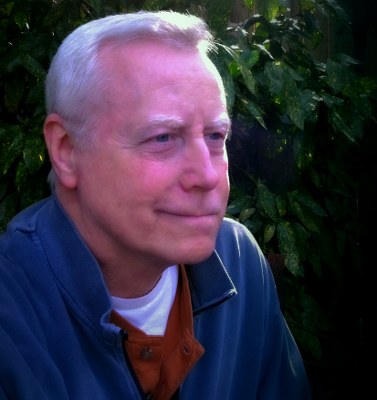 Cliff Yeargin has spent his life as a ‘Storyteller, traveling the U.S. as a Writer/Producer/Photographer and Editor in Broadcast journalism.

He began his career in the mountains of Western North Carolina where he worked with two college buddies, both who went on to become Sports Broadcasting Legends. Yeargin did not, but he did shoot the only video of the first 3-Point goal in the history of NCAA College Basketball. This is NOT fiction…you can look it up!

His travels as a broadcaster have taken him to dozens of Major League ballparks, World Series, Super Bowls, Final Fours, NASCAR, National Championships and he managed to convince his bosses for many, many years that staying at a Baseball Spring Training camp for two months involved hard work and sacrifice.

He has written stories in more places than you can count. In dugouts with rats under his feet, smelly locker rooms, planes, trains, hotel bars, buses at 4AM outside Detroit. All while submitting a staggering number of falsified expense reports.

He grew up on a rural cattle farm in Georgia, which taught him many valuable life lessons, such as never poke a big bull in the rear with a big stick.

A proud Bulldog graduate of the University of Georgia, he has now returned to his native state and lives in a downtown Atlanta neighborhood.

There is no Atlanta neighborhood known as ChickenBone…but there should be.