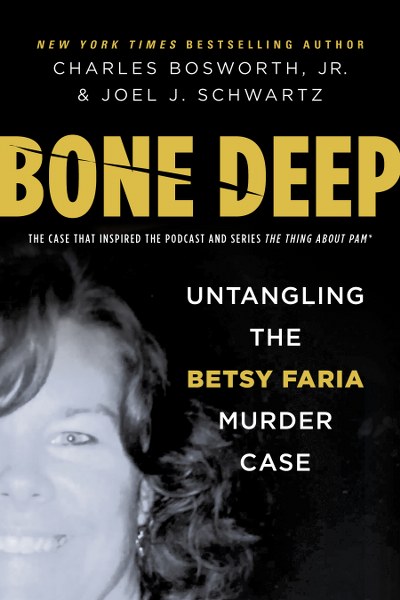 On December 27th, 2011, Russell Faria returned to his Troy, Missouri, home after his weekly game night with friends to an unthinkable, grisly scene: His wife, Betsy, lay dead, a knife still lodged in her neck. She’d been stabbed fifty-five times.

First responders concluded that Betsy was dead for hours when Russ discovered her. No blood was found implicating Russ, and surveillance video, receipts, and friends’ testimony all supported his alibi. Yet incredibly, police and the prosecuting attorney ignored the evidence. In their minds, Russ was guilty. But prominent defense attorney Joel J. Schwartz quickly recognized the real killer.

The motive was clear. Days before her murder, the terminally ill Betsy replaced her husband with her friend, Pamela Hupp, as her life insurance beneficiary. Still, despite the prosecution’s flimsy case and Hupp’s transparent lies, Russ was convicted—leaving Hupp free to kill again.

Bone Deep takes readers through the perfect storm of miscalculations and missteps that led to an innocent man’s conviction—and recounts Schwartz’s successful battle to have that conviction overturned. Written with Russ Faria’s cooperation, and filled with chilling new revelations and previously undisclosed evidence, this is the story of what can happen when police, prosecutor, judge, and jury all fail in their duty to protect the innocent—and let a killer get away with murder.

Charles Bosworth Jr. is a New York Times and Amazon bestselling author of six true-crime books, with millions of books in print, as ebooks, and audiobooks. He wrote about crime and the courts in twenty-seven years as a daily newspaper reporter, including twenty years with the St. Louis Post-Dispatch. He also has reported for the New York Times and the Chicago Tribune. He lives in Southwestern Illinois in the metro St. Louis area.

Joel J. Schwartz earned his law degree from the University of Texas School of Law and has spent thirty years as a criminal defense lawyer in the St. Louis region as a principal in Rosenblum, Schwartz & Fry.. He has been selected to the annual Super Lawyers list, is a member of the Top 100 Trial Lawyers for the American Trial Lawyers Association, and is a lifetime member of the National Association of Criminal Defense Lawyers. He has appeared on Dateline NBC, 60 Minutes, CBS Morning News, CNN, Fox News and numerous local news affiliates.