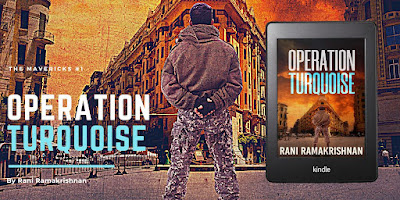 One is a brave soldier, the other a deadly terrorist. A camera will decide which man survives. 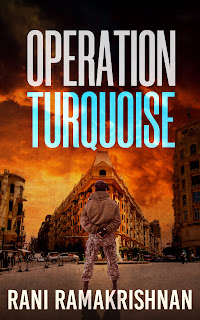 The Major is a seasoned field agent, and neutralising a target is routine for him. But everything about Operation Turquoise, from the target to the weapon, is disturbingly unconventional. Alone in a foreign country, the Major must execute each stage of his mission with utmost precision. There is no Plan B.
The Poet has a way with words—and warfare. His voice echoes in thousands of homes worldwide, yet few have ever seen him. Endowed with a sharp mind and evil intent, the Poet has orchestrated many spectacular terror attacks in Asia and Africa. His latest mission has the Indian intelligence fraternity on its toes.
Ridden with risks, Operation Turquoise will bring the two men head to head—and only one will survive.

Meet The Major from Operation Turquoise

The Major, 6.2’ lean and fit with short black hair, was like any regular Indian man, unless he was on duty; then he became the job.

Along with hundreds of pumped up youth in their late teens, he became a gentleman cadet at the National Defence Academy (NDA) just before the 80s decade ended. It was a career decision like becoming a doctor or engineer for him. But his training at the academy transformed him for life. His profession became more than a mere job to him.

Every time he donned the crisp green army uniform, his soul took on a new life. Any task assigned to him become a responsibility he had to fulfil, irrespective of the odds.

As a young lieutenant, eager to challenge his own abilities, he volunteered to become a Special Forces Paratrooper. This required another year of intense training.

The opportunity to join the Special Group, India’s secret special force unit that took on assignments that the government could not acknowledge, came soon after. Completing the additional training and becoming a member of Col Bhatti’s team of Special Group soldiers known as the Mavericks was the single most cherished accomplishment of his life.

It was also the decision that put an almost definite expiry date on his life.

Now the tasks that he undertook were not only dangerous but also top secret. The day he failed at an operation, that day he ceased to exist. But this reality didn’t deter him or weaken his resolve because his failure also meant the success of a serious threat to India’s national security. As long as he breathed, he could not let that happen.

For Operation Turquoise, he found himself in the land of the Pharaohs disguised as a tourist but he had no time for sightseeing. He had to hunt a man who had not been sighted in years.

From his NDA days, he was known for his ability to disguise himself. On this mission, this skill was put to the ultimate test. His disguise had to work for his mission to succeed. Being a Krav Maga expert, hand-to-hand combat was another one of his strengths that came in handy when an unexpected development threatened to derail the mission.

While among friends and colleagues, he was a regular person who cribbed about cancelled leaves and poorly planned field operations. He criticised aspects of the armed forces he found wanting and had realistic expectations about what the government of India could offer him in lieu of field support.
He was single, and had always worked in an all-male environment. Even the mention of a woman in the background made him doubt the credibility of the plan for the mission. But no matter what his misgivings, once given a responsibility he makes it his mission to complete it.

Rani Ramakrishnan writes contemporary thriller novels. In another lifetime, she was an entrepreneur, a management professional, a trainer, even an author of study materials for distance education. She is an occasional blogger and a regular bookworm. Two things influence her writing: people she met and the places she has visited.
She lives in Coimbatore, a picturesque city on the foothills of the Nilgiri Mountains, in South India. She loves the outdoors and of late, she has developed a healthy passion for marathons.