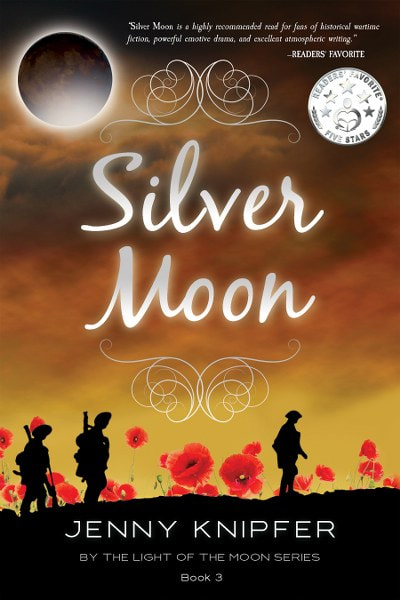 Silver Moon
By the Light of the Moon Book 3
by Jenny Knipfer
Genre: Historical Fiction

A tale of courage and hope in the darkest of times…
Silver Moon, the third book in the series: By the Light of the Moon, paints a stunning and poignant picture of life on the home front in Webaashi Bay, Ontario, and of three men who are a part of the Canadian Expeditionary Force during WWI.
Shamed into joining the war, the tide turns for Luis Wilson when he is steered into the depths of espionage. Injured and presumed missing, will he lose his heart to the very woman who presented him with a white feather?
Oshki and Jimmy offer a grim perspective on life in the trenches. They despair of ever returning home to the women who hold their hearts.
Meanwhile, Lily fights for the cause in her own way and rallies the female troops at home as prejudices run high and the local cafe owner is accused of being a spy.
Will the women of Webaashi Bay receive their men back unscathed? Can the power of love win out over insurmountable odds? All this drama and more plays out under the light of a silver moon.
Fans of WWI historical fiction, Christian historical fiction, and literary fiction will find Silver Moon a moving, powerful read!
“Silver Moon is a highly recommended read for fans of historical wartime fiction, powerful emotive drama, and excellent atmospheric writing.”–Readers’ Favorite
“I am stunned by the amount of detail the author gave in this single story. On one hand, we have powerful characters… and on the other, we have a plot that demands all our attention. Jenny Knipfer pulls no punches and holds nothing back.”–Readers’ Favorite
Goodreads * Amazon
Book Trailer
https://youtu.be/m1u3uhLcM2A 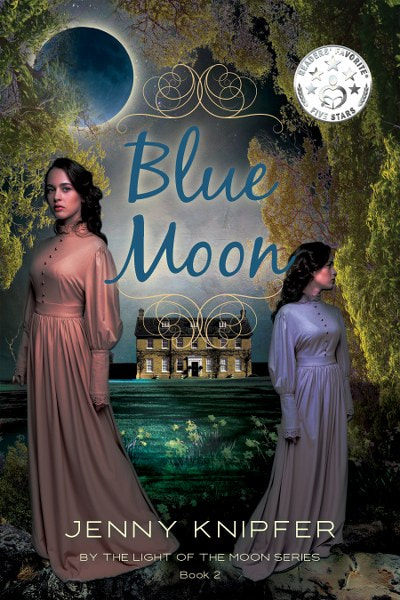 Blue Moon
By the Light of the Moon Book 2

The year is 1885 and unwed Vanessa Gulet must surrender her newborn son to her married twin sister, Valerie, to raise. A seed of bitterness grows in Vanessa. When the opportunity arises for her to have what she’s always wanted, Vanessa takes it despite the consequences to her family, getting more than she bargained for.
Meanwhile, Valerie, overcome with loss and grief, faces the diagnosis of multiple sclerosis. Will she and her husband, Felix, forge through their trials together or will life’s upsets cause them to drift apart? Will Vanessa and Valerie remain at odds, or will they allow the power of forgiveness to heal their strained relationship?
Love seems to bloom in the most unlikely of places in Webaashi Bay for an old friend of Jenay’s and a woman who owns the local dress shop. A parallel tale of love, forgiveness, and reuniting lost things is spun by a local author adding another dimension to the tale of the Gulet twins and their saga.
**On Sale for only .99 cents!! **
Add to Goodreads
Amazon * Apple * B&N * Kobo * Books2Read 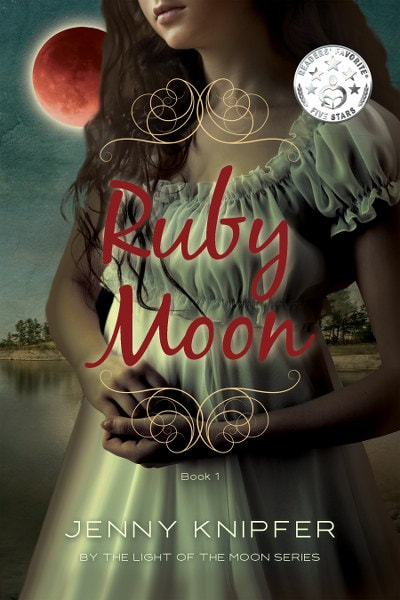 Ruby Moon
By the Light of the Moon Book 1

Ruby Moon embodies a tale of grief, guilt, and romance set on the shores of Lake Superior in Ontario during the mid 1890’s. Jenay, a young woman of mixed French and Ojibwe descent, must survive the trauma of causing a horrific accident.
Amidst this drama, Jenay is caught in a web spun by Renault, a rich, charming man who once threatened ruination of her father’s shipping company but now seeks something even more valuable…
Jenay must find where her strength lies in order to face the challenges life brings her or be washed away like driftwood on the tumultuous shores of Lake Superior. Life’s richest dramas are played out under the banner of two ruby-colored moons and become the hidden gems which forge her into a mature strong woman. Jenay realizes God is by her side, using even the harsh events of life to create something precious in her.
**On Sale for only .99 cents!! **
Add to Goodreads
Amazon * Apple * B&N * Kobo * Books2Read 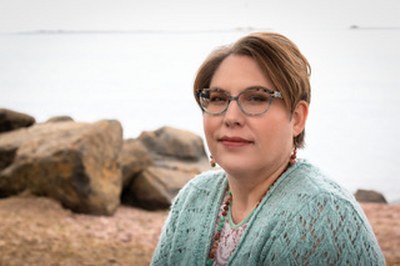 Jenny lives in Wisconsin with her husband, Ken and their pet Yorkie, Ruby. She is also a mom and loves being a grandma. She enjoys many creative pursuits but finds writing the most fulfilling.
Jenny’s education background stems from psychology, music, and cultural missions. She spent many years as a librarian in a local public library but recently switched to using her skills as a floral designer in a retail flower shop. She is now retired from work due to disability.
She authored and performed a self-published musical CD entitled, Scrapbook of a Closet Poet. Jenny acquires joy in the journey as an author. Ruby Moon, the first title in her historical fiction series: By the Light of the Moon, earned a five star rating from Readers’ Favorite. Her books are available in eBook and paperback formats through Amazon and Ingramspark.
Jenny holds membership in the: Historical Novel Society, Wisconsin Writers Association, and Midwest Independent Booksellers Association.
Jenny’s favorite place to relax is by the western shore of Lake Superior, where her novel series is set.
Website * Facebook * Twitter * Instagram * Bookbub * Amazon * Goodreads