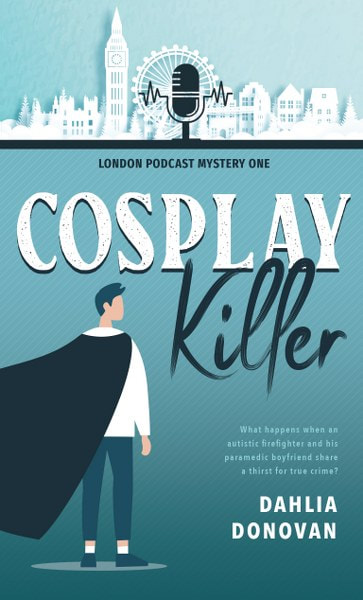 What happens when an autistic firefighter and his paramedic boyfriend share a thirst for true crime?
Osian Garey and Dannel Ortea live together in a colourful flat in Covent Garden. They run a podcast and throw themselves wholeheartedly into Cosplay, video games, and musical theatre. This year, they’re all fired up to attend their annual convention with a group of first responders.
When Osian finds a paramedic friend murdered in the middle of the crowded venue, the police immediately turn their attention to him.
They have one question on their mind.
Is he the first witness on the scene or the killer?
As the mystery unfolds, Osian has to face the trauma of his last job as a paramedic. Somewhere in those memories, a killer waits to exact revenge. They’ll have to prove Osian’s innocence and fight for their own survival when the killer puts them both in their sights.
Add to Goodreads
Amazon * Apple * B&N * Kobo * Books2Read

Dahlia Donovan wrote her first romance series after a crazy dream about shifters and damsels in distress. She prefers irreverent humour and unconventional characters. An autistic and occasional hermit, her life wouldn’t be complete without her husband and her massive collection of books and video games.
Website * Facebook * Twitter * Instagram * Bookbub * Amazon * Goodreads * Newsletter