To celebrate the release of Shattered, Book 2 in the Of Light and Blood Saga, BOTH books are on sale for a limited time! What she doesn’t know could get them all killed. Loti Dupree’s healing powers could change the nature of life itself, and she doesn’t even know it. But 500-year-old vampire Wolf Arrighi does. He’s been living outside the boundaries of his own kind, seeking her for centuries, and when their worlds finally collide, the passion ignited between them is more than either bargained for.

Together, their powers become something entirely new–and entirely dangerous. The sudden surge of elemental magic attracts an ancient evil hell bent on nothing less than the utter destruction of humankind. And they’ve just handed him the key. One by one, the people they love become casualties, and Loti and Wolf are in a desperate race against time to fight an epic battle that could cost them not just their lives, but their very souls.

He surrendered his soul to the Devil. She could be the one to save it. More than a century ago, Christian Harris gave up everything in a last desperate attempt to finally have the revenge that had consumed him. The vampire that turned him promised him wealth, power, and the revenge he most wanted. But Christian found no satisfaction in his final triumph, and he wanted nothing more than to disappear into the depths of darkness and forget everything he hadn’t done right– and everyone he couldn’t save.

But when he’s brought before his Master and sent on a mission to seduce Heather Macgregor, he finds himself captive to the untrained red-headed witch who wakes him to buried longings and something he never expected: hope. In her bed he finds passion without boundaries and in her heart, redemption. But Heather also unwittingly provides him with the key to his Master’s obsession, the Light Walker Loti Dupree.

Now a pawn in a dangerous game, Christian must make an impossible choice: save the one who saved his soul and condemn the World to darkness or save the world and forever lose the only love he’s ever known. Paranormal Romance and Urban Fantasy author Melissa Lummis lives in the mountains of Virginia with her husband and two kids, her support system and constant inspiration.

When she’s not manifesting with the moon or mixing up magic, you can find her cloistered in her yurt diving into her fantasy world to craft heart-stopping and heart-warming adventures for her characters.

When you subscribe to Melissa’s newsletter, you not only get the best source of magic, UF/PNR books, and motivation, you also get a free ecopy of the Little Flame Coloring book! Subscribe by clicking HERE~>http://www.melissalummis.com/newsletter-signup 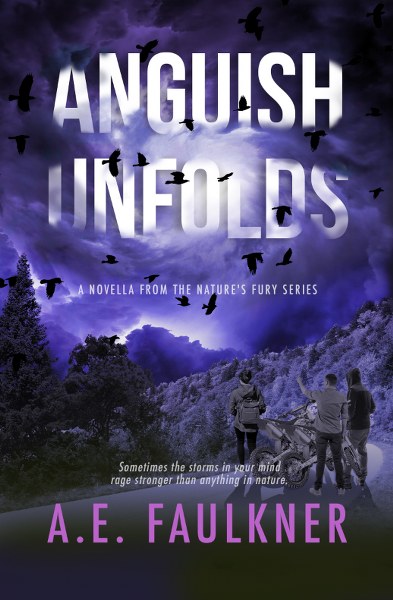 With the life she
knew all but gone, Riley must decide if she’ll let the road ahead
break her spirit or bolster her drive.
When her sister’s
safety is threatened, Riley discovers just how far she will go to
protect Quinn. No matter the toll – emotionally and physically.
With little faith in returning to the only family she has left, Riley
follows the path that she believes is her only choice. Relying on
others to lead the way, she is forced to face some of her deepest fears.
NOTE: You must have read Darkness Falls in order to understand Anguish Unfolds.
Although I recommend you read Anguish Unfolds before diving into book
2 in the series (Chaos Ensues, coming in 2020), it is not necessary.
Goodreads * Amazon 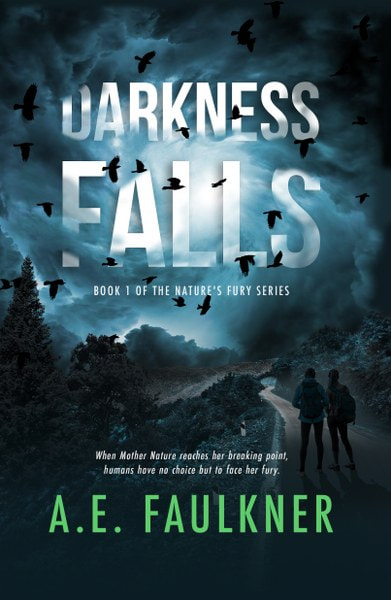 As nature tires of human destruction, two sisters must face a changing
environment that stands between them and survival.
When Quinn and Riley set out on a family vacation with their parents, the
trip ends before it begins. Mother Nature interferes with their
plans, setting off a sequence of events that thrusts the teens into a
hostile landscape.
Stranded, with limited supplies, struggling to figure out who they can trust
along the way, they must determine how to survive nature’s evolving fury.
Goodreads * Amazon 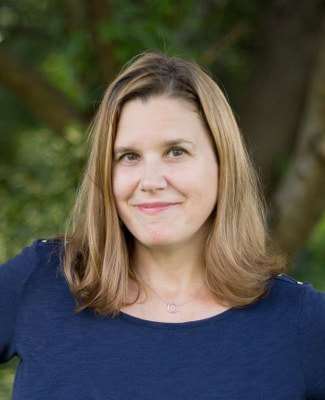 AE Faulkner is a young adult dystopian author. Her debut novel, Darkness
Falls, is the first book in the Nature’s Fury series, which explores
the Earth’s response to humans poisoning her streams, abusing her
animals and destroying her beauty.
She has a bachelor’s degree in marketing from Millersville University
and a master’s degree in advertising, public relations &
journalism from Temple University.
Although she escaped in books as a child, college textbooks sucked the fun out
of reading. Years later, The Hunger Games trilogy became the spark
that rekindled her love of books. After devouring that series, she
quickly became captivated by dystopian novels.
After several years of reading them, she decided to take a stab at writing
one that combined her love for nature with her fear of human
destruction
Website * Facebook * Twitter * Instagram * Bookbub * Amazon * Goodreads